The key to a return to biodiversity

ChitosanHC in the soils: absent or present...

The effects of ChitosanHC are manifested both by the leaves, directly, and via the soil, by the action of bacteria. When spraying, there is no loss of product and this is remarkable.

In the first case, the product systematically enters the leaves, invests each cell and causes the formation of an enzyme (Chitinase), as well as the formation of hormones and proteins, all of which stimulate the plant's natural immune system. There is also an increase in the thickness of cell walls which causes better resistance to abiotic stress. This case only applies to plants with lots of leaves and in combination with the following case.

In the second case, the product enters the soil and given its quality of "sugar" (polysaccharides), it feeds many bacteria (bacillus, pseudomonas fluo, actynomictes, mycorrhizae, rhizobacteria,...).
ChitosanHC molecules are broken down by bacteria after an enzymatic reaction, so that constituent nitrogen, carbon, oxygen and hydrogen are slowly released into the soil. ChitosanHC behaves like a fertilizer that slowly releases its components at the rate of decomposition.
The enzymes produced that come into contact with the roots are absorbed by the plant and strengthen its biotic and abiotic immune system.
These chitosanHC-fed bacteria and other natural elements proliferate and the proportion of symbiotic organisms increases significantly due to the plant's biodiversity and vigour.
The part of chitosanHC that is not used by bacteria complex cations such as Ca, Fe, Zn,..., mobilizes them and facilitates their transfer, directly or via mycorizhes, to the roots. The product therefore has an "accelerator" effect that improves the availability of nutrients for plants and the transport of these elements to the leaves. This Chitosan also reacts in the plant as in the first case and forms stimulating and protective enzymes.

One of many publications….

The Multifunctional Role of Chitosan in Horticultural Crops; A Review

Chitosan is a naturally occurring compound and is commercially produced from seafood shells. It has been utilized in the induction of the defense system in both pre and post-harvest fruits and vegetables against fungi, bacteria, viruses, and other abiotic stresses. In addition to that, chitosan effectively improves the physiological properties of plants and also enhances the shelf life of post-harvest produces. Moreover, chitosan treatment regulates several genes in plants, particularly the activation of plant defense signaling pathways. That includes the elicitation of phytoalexins and pathogenesis-related (PR) protein. Besides that, chitosan has been employed in soil as a plant nutrient and has shown great efficacy in combination with other industrial fertilizers without affecting the soil's beneficial microbes. Furthermore, it is helpful in reducing the fertilizer losses due to its coating ability, which is important in keeping the environmental pollution under check. Based on exhibiting such excellent properties, there is a striking interest in using chitosan biopolymers in agriculture systems. Therefore, our current review has been centered upon the multiple roles of chitosan in horticultural crops that could be useful in future crop improvement programs.

The "toolbox" for sustainable culture

The use of ChitosanHC is part of the toolkit for supporting biodiversity in soils and make plants healthy. 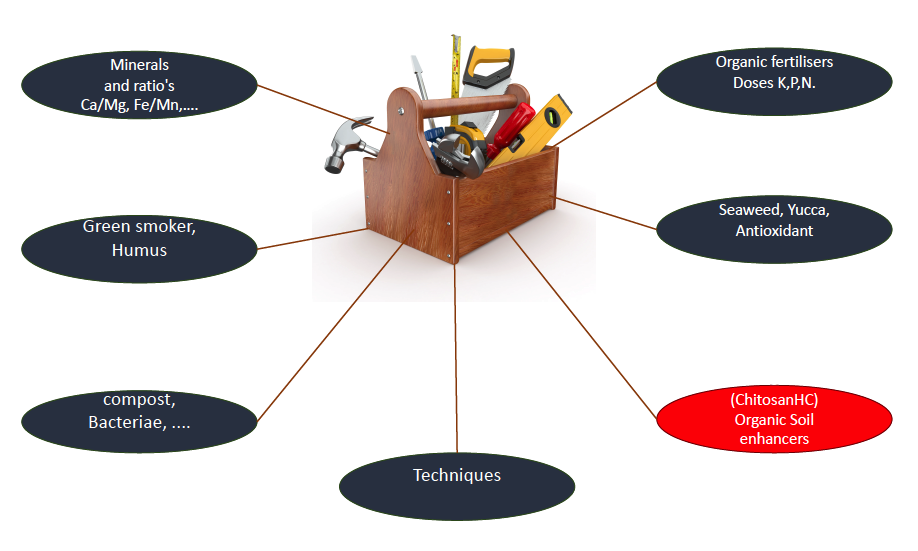 All operations that improve soil quality allow the beneficial functioning of ChitosanHC: the physical (permeability, structure,...) and chemical (pH, minerals, balances,...) properties of the soil must be sufficient and maintained on the basis of testing and analysis.
The presence of bacteria is essential to the action of ChitosanHC.
The use of bacteria-destroying chemicals is an obstacle to their effectiveness. 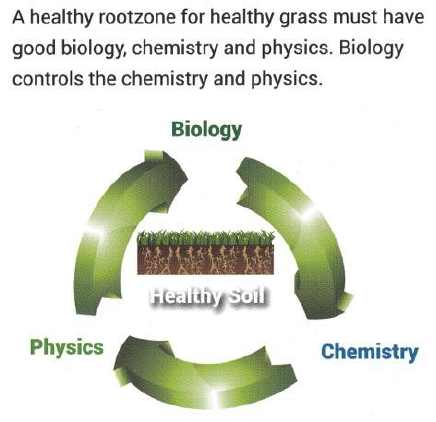 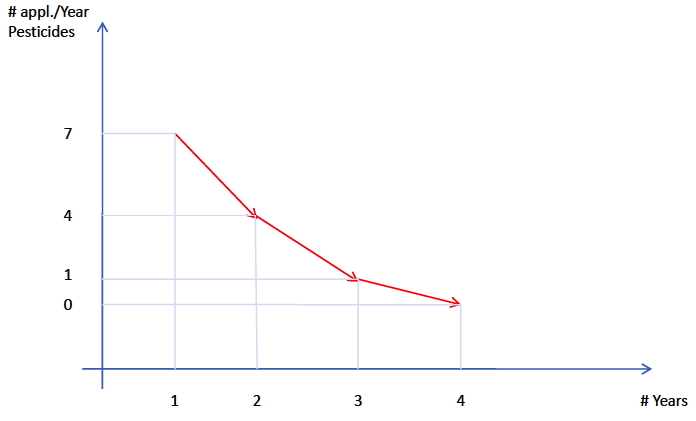